Vaping: Harmful to Your Health 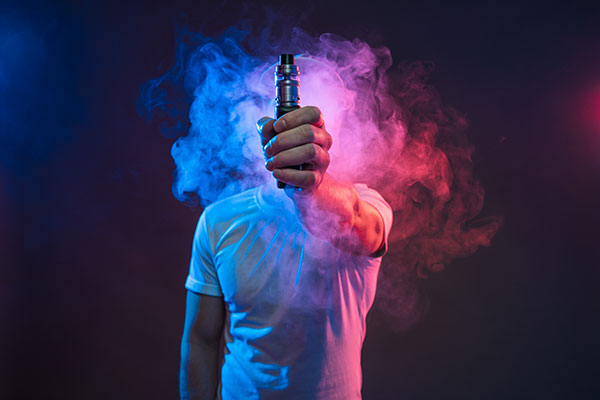 “Vaping” has become a popular form of simulating the smoking of tobacco and marijuana products, among other substances. “Vaping” specifically refers to using an electronic cigarette (‘e-cigarette’) or similar device to inhale an aerosol, typically to mimic the smoking of a desired product.

How does “vaping” work?

We know that an aerosol is a suspension of fine or ultrafine solid particles or liquid droplets in a gas or in air. While “vaping,” the e-cigarette uses a heater to atomize a liquid into an aerosol that is inhaled by the user.

Designed to imitate the smoking of tobacco, e-cigarettes primarily were inspired by the need to provide a “safer” way to smoke nicotine-based products as compared to combustible tobacco products. Since their introduction, however, e-cigarettes have evolved to enable the use of other products, such as Tetrahydrocannabinol (THC), the main psychoactive compound in marijuana.

What are the risks?

Although more research is necessary, “vaping” is considered less hazardous to one’s health than using combustible tobacco and THC products due to the absence of ash, tar, and carbon monoxide. Regardless, “vaping” has many known risks and potentially unknown risks, including the fact that many “vaping” risks are product dependent.

For one thing, a “vaping” apparatus carries a known risk for traumatic explosion injuries particularly to the hands, face, eyes, and airway. The risk comes from the explosion risk created by the devices’ batteries, especially if overcharged, and its heating elements, especially if used in a matter different than its original intent.

For another, “vaping” may deliver many of the same toxins as combustible tobacco smoking. These similar toxins may include nicotine (a potentially lethal poison), formaldehyde, acetaldehyde, and ethylene compounds. “Vaping” also may deliver other toxins such as highly toxic heavy metals that also may be carcinogenic.

Concerning nicotine, we know it is an addictive, potentially lethal poison now delivered by a variety of “vaping” products. Known adverse health effects specific to nicotine use include harm to a developing fetus; brain damage to children, teens, and young adults; coronary artery disease; hypercoagulation and pathologic blood clots; bronchospasm and respiratory disease; and abnormal heart rates and rhythms.

And we now know of several adverse health effects associated with “vaping,” including addiction, chest pain, seizures, hypertension and hypotension, possibly fatal airway disease, and heart rate abnormalities. In addition, with the soaring popularity of flavoring additives in “vaping” products, the toxic effects of “vaping” appear to increase significantly.

Currently the most recognized increase in toxicity appears to be connected to airway disease. In fact, flavoring compounds have been linked to the development of a potentially fatal respiratory condition similar to the presentation of a severe corona virus infection.

Given the known adverse health effects and potentially unknown risks of “vaping,” all that appears “safe” about it is that it can and most likely will be harmful to one’s health.

« Next Post: Opioid Overdose: Recognizing It and Taking Effective Action